AHHHH! happy valentines day y'all! Ashlee from Growing Up A Thomas shared the cutest post today. it was kinda like the newlywed game, where both her and her husb answered the same questions about her. so i copied down the questions, wrote my answers, then passed them on to KJB for his answers. 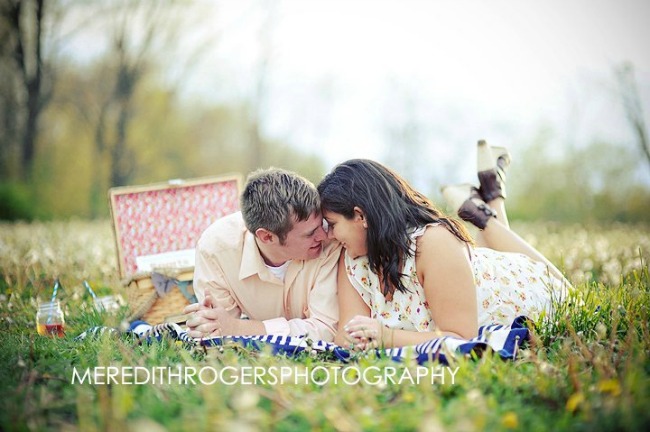 How long have you been together?
C: it was seven years in  January
K: six years and eight months (later he realized he completely messed up the question - he took the time we dated plus the months we have been married. which doesn't come out right either :P )

Where was your first date?
C: to the movies on Thanksgiving
K: we watched Finding Nemo at your house

Where was your first kiss?
C: my house while watching Finding Nemo. super awkward because he text me about kissing me before he did it. ;)
K: your house

What were your wedding colors?
C: we didn't stick with specific colors, just kept it neutral with pastels
K: didn't have any

What is her most commonly used phrase?
C: i'm not sure and i have no idea what he will say
K: dang it

If she were ordering drinks for both of you what would you each get?
C: water with lemon for me, water no lemon for him. or a coke for him. or white wine for me.
K: wine for her and beer for me

What is the best meal she has ever cooked?
C: i would say stir fry but that's because it's my favorite. he might say meatloaf.
K: i don't know, there are too many. meatloaf is pretty good.

What is the most played song on her iPod?
C: *searches iTunes for most played song* tie between Sleazy by Ke$ha (what can i say? i'm classy) and I Won't Give Up by Jason Mraz.
K: an nsync song

What would she say is your most annoying habit?
C: farting
K: farting. or driving. (driving's not a habit KJB, but you are pretty bad at it)

What is the last thing she does before she goes to sleep?
C: plug up my phone
K: kisses me goodnight. or plays on her phone

If you could throw out one item of her clothing what would it be?
C: probably my pink skinny jeans. oh! no, this over sized black and gray cardigan i wear around the house
K: that huge sweater

What would you say is your favorite thing about her?
C: he will probably say my personality. i would say my hair :)
K: her sweet words of encouragement