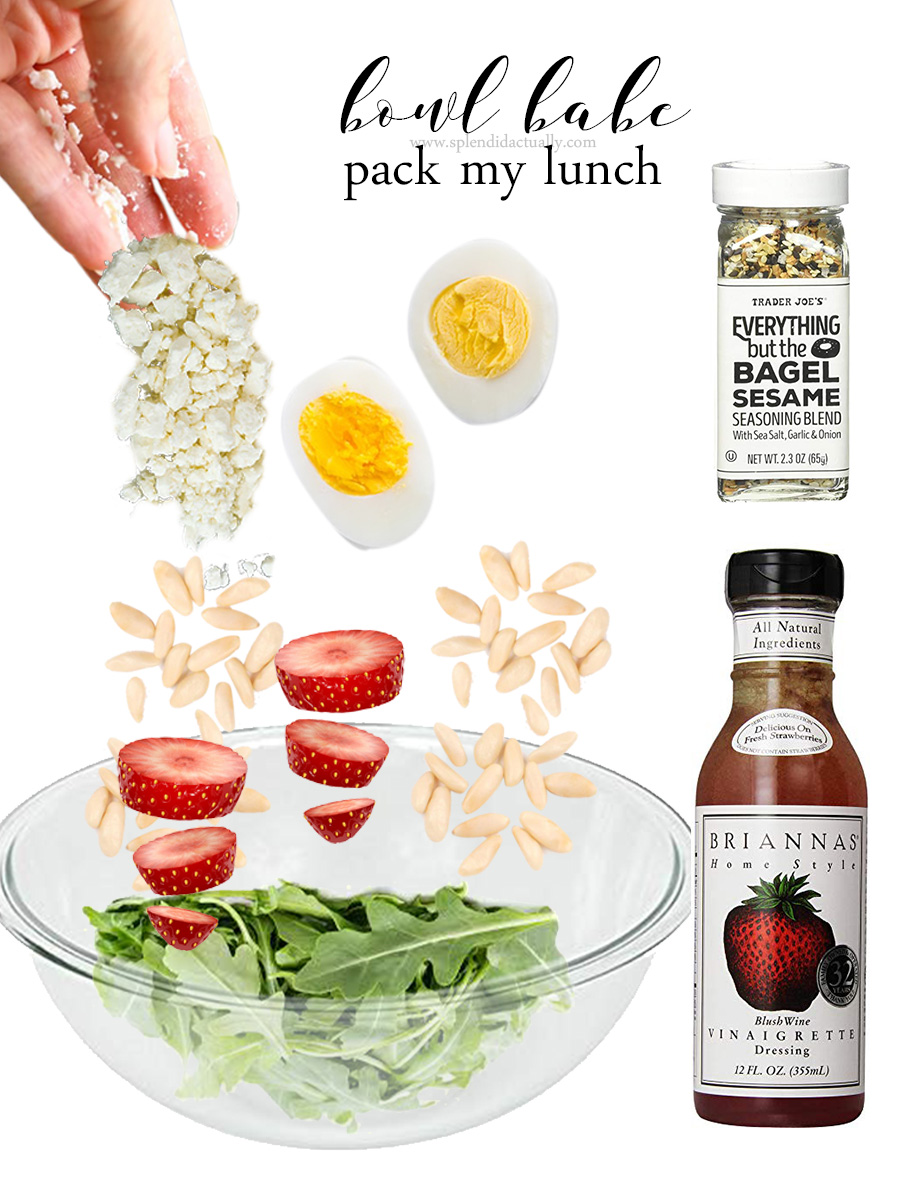 My go-to lunch for the past several weeks. Fresh arugula because I love the taste - just a bit peppery and not chewy or bitter like kale. Sweet, sweet strawberries make it feel like a treat and compliment the vinaigrette so nicely. Pine nuts and a boiled egg for protein. I also love this with grilled chicken, but unless I've already got some made up as a leftover, I wouldn't take the time during the week. Feta cheese gives it a nice salty and tangy taste. Top with that dressing and a sprinkling of Everything But The Bagel for a nice onion and garlic flavor. This salad comes together so quickly when you're running late in the morning!

Email ThisBlogThis!Share to TwitterShare to FacebookShare to Pinterest
Labels: food

The Kind of Life 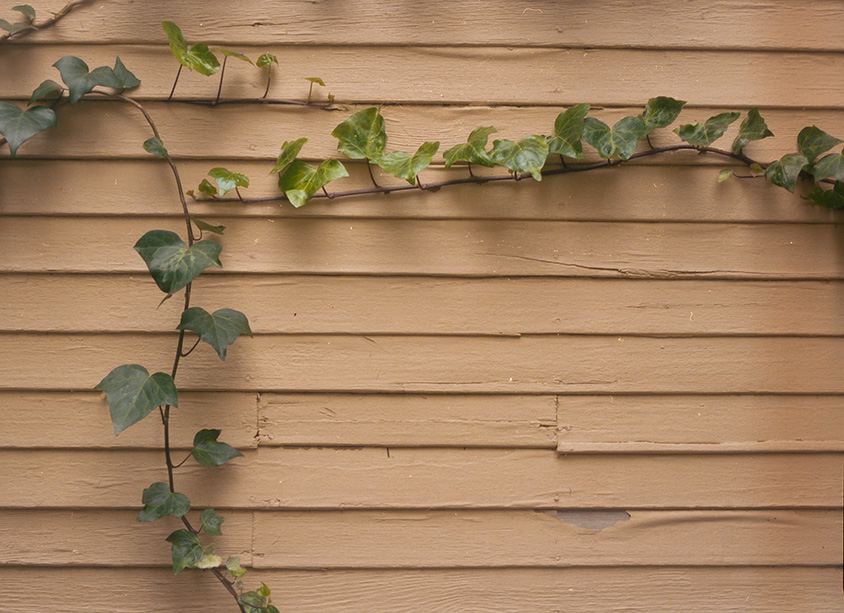 During my devotion this week, the Holy Week leading up to Resurrection Sunday, I came across a scripture I had never read before. By no means am I affluent in theology, but I do feel as though I've read quite a bit of the New Testament. I was so moved and humbled by this text, I found it only fitting to share it today, Good Friday. Let us rejoice that we have an incredibly loving Father who set the perfect example.

The Kind of Life He Lived

18-20 You who are servants, be good servants to your masters—not just to good masters, but also to bad ones. What counts is that you put up with it for God’s sake when you’re treated badly for no good reason. There’s no particular virtue in accepting punishment that you well deserve. But if you’re treated badly for good behavior and continue in spite of it to be a good servant, that is what counts with God.

21-25 This is the kind of life you’ve been invited into, the kind of life Christ lived. He suffered everything that came his way so you would know that it could be done, and also know how to do it, step-by-step.


He never did one thing wrong,
Not once said anything amiss.

They called him every name in the book and he said nothing back. He suffered in silence, content to let God set things right. He used his servant body to carry our sins to the Cross so we could be rid of sin, free to live the right way. His wounds became your healing. You were lost sheep with no idea who you were or where you were going. Now you’re named and kept for good by the Shepherd of your souls. 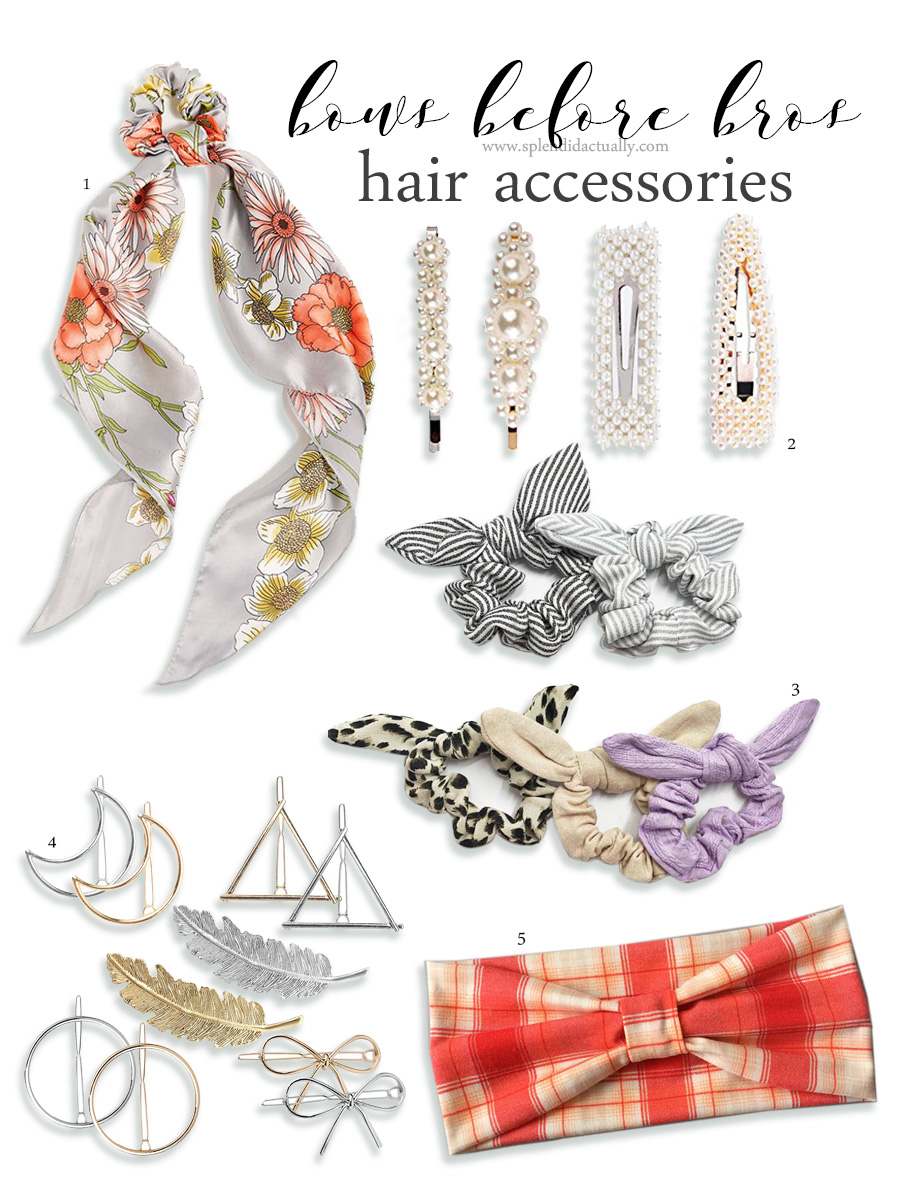 For those who are ready for a bold and feminine look, this hair scarf will make a statement! Offered in a variety of color and pattern, I love how a scarf can completely change your look! A look just as feminine, but slightly less bold, these pearl clips are slightly oversized and feel like such a throwback to my middle school days - but prettier! The scrunchie trend has been back for a minute, but I finally hopped on board when Lilee's Bowtique offered up these with a cute little tails (which can be tucked under if you're not so keen). They have a huge variety of them and I find them to be a great price point. Also at a great price point is this variety pack of metal clips! A gold and silver of each design and I love how simplified they are. Lastly, if you're not quite ready to go bold with a hair accessory, I think a headband or a wrap is a comfortable way to start. Since they are much more common, you could easily opt for one very simple and understated - then when you're ready, go for a bright color or pattern.

Have you tried out a hair accessory? Which is more your style? If you decide to try out one of these, I would love for you to send me a pic on Insta so I can see how you style it!
Posted by cwork621 at 6:30 AM 7 comments:

Email ThisBlogThis!Share to TwitterShare to FacebookShare to Pinterest
Labels: fashion

Every few months I like to do an update on the things currently going on in my life. Here's an update since my last CURRENTLY, in November. 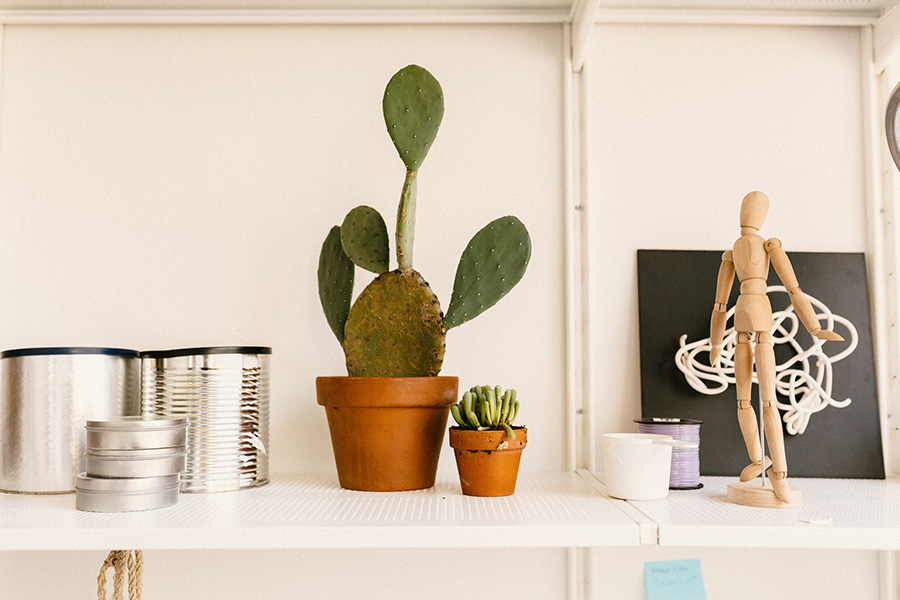 That Kind of Mother by Rumaan Alam was a great story about a mother's journey through discovering who she is as a mother, what it's like to be a white mother with a black son, and how your life sometimes turns out much differently than what you think. The beginning of the book was difficult to get through, because I struggled to connect with the story, but I'm really glad I stuck it out because the meat of the book was worth it.

The Immortalists by Chloe Benjamin is probably my favorite read of the year. We follow the story of siblings who discover a psychic who prophecies their death dates, which they are prohibited to share. The novel dives into each character, what they do with the information, how they choose to live leading up to their dates, and how the winding bond of family is often stretched and pulled in various ways and times through the mountains and valleys of life.

A Piece of the World by Christina Baker Kline is an interesting story following the life of a small town farm girl. She becomes a sort of muse or inspiration for a well-known artist and we learn about her childhood.

Traveling...
In January, KJB and I drove to Tennessee to spend some time with family. They are currently converting a Sprinter van into a home, so we helped them paint cabinets, ate some delicious Mexican food, and had some quality time. It was SO nice to get away for just the weekend, put our responsibilities on hold and do something selfish. 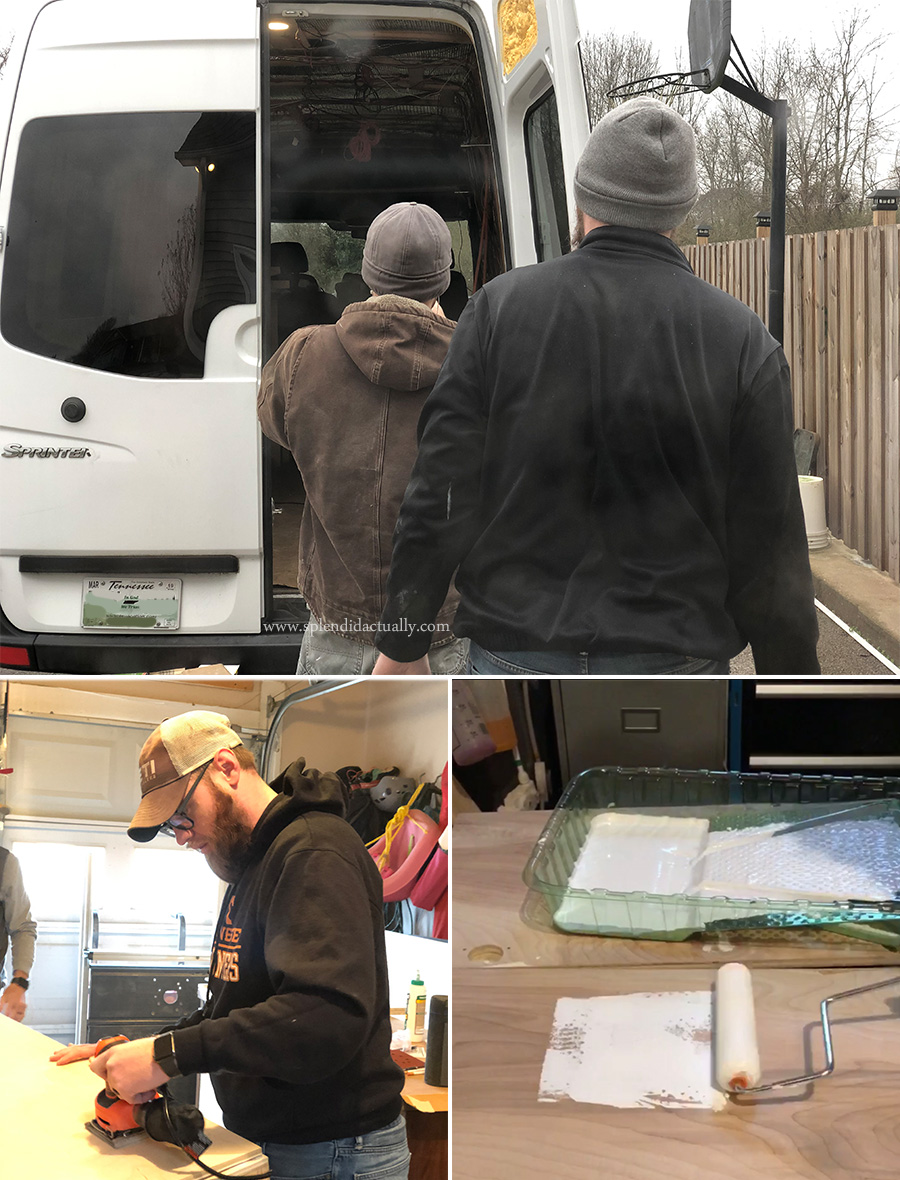 In case you catch me mid-daydream, know it's because I'm dreaming of fluffy sand beaches. A couple of weeks back, we vacationed to the Emerald Coast of Flordia and I pampered myself with beach reading, enormous amounts of iced coffee, and allowed the sun to tint my skin just the tiniest bit. (Not much, just a bit. My favorite sunscreen saves the day yet again.) 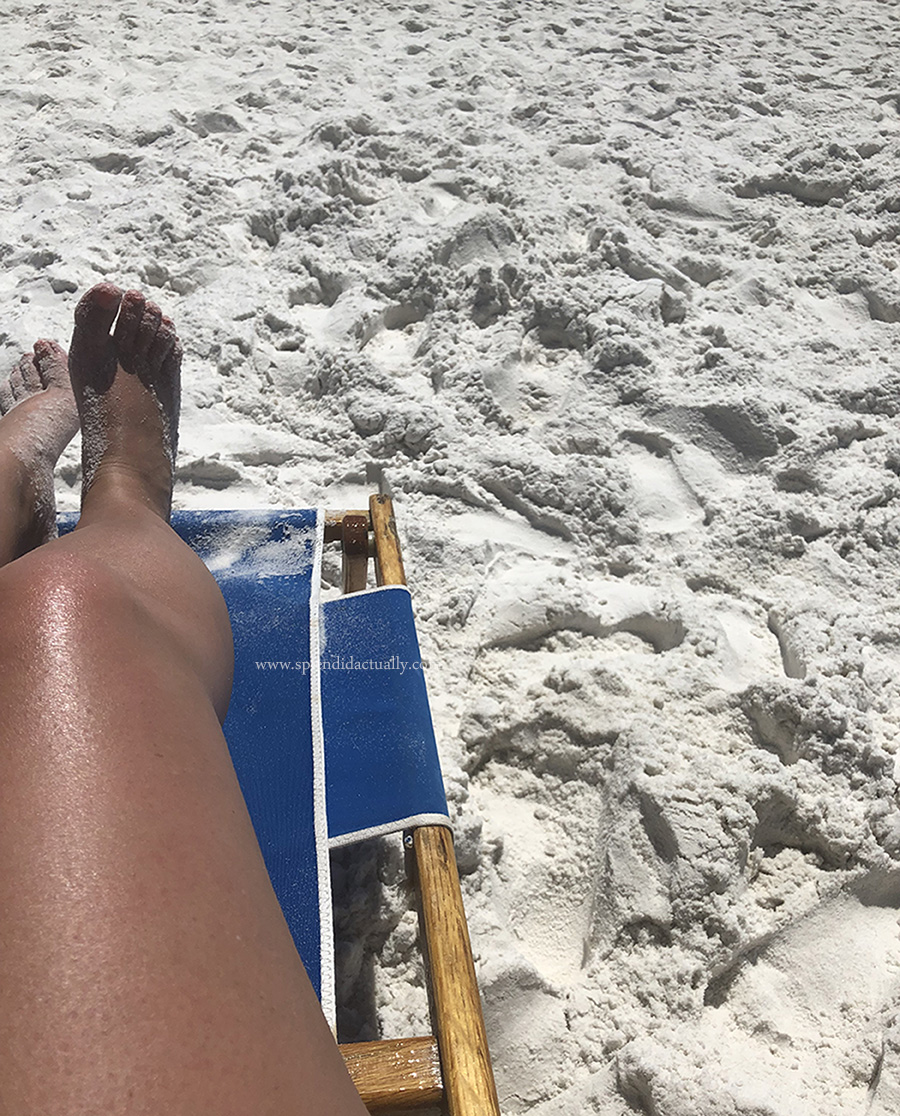 I'm currently planning a work trip to Chicago this summer (there WILL be time for fun and cinnamon rolls at Ann Sathers) and in a surprise turn of events, I'll be headed back to NYC in December. In November I shared all about our weekend trip to the city, and how I likely wouldn't go back again. *shrugs* but you just never know what exciting thing is on the horizon!

Doing...
The past six months I've loved becoming involved in group fitness classes like yoga and pilates. I tend to go on my lunch break for a short, 30-minute class, but those 30 minutes really rejuvenate me. Getting out of the office and giving my brain a break has been really nice.

If you don't follow me on Insta, you may be wondering about the organ donation I announced in November. Unfortunately I found out in January, after 5 months of testing, fasting, dieting, collecting, and a million other verbs, I had been denied the donation. There were several factors that went into the committee's decision (yes, there's an entire committee that decides if you are accepted or denied!) and if you want to know more about that, I have everything saved under my Insta Story highlights. So that's something I haven't been doing - but what I have been doing is REFOCUS. Ironically, just four days after settling on this word for my work of the year, I found out I couldn't donate. I thought the word would force me to concentrate on my health, recovery, and the very emotional and spiritual aspect of this surgery. Instead, I was forced to refocus; the #52weekchallenge helped me with that. I've been slowly, week-by-week actually decluttering, purging, and reorganizing.

Wearing...
As I mentioned, I've recently been doing a lot of yoga and pilates, which means I've added some new workout clothes to my wardrobe. These leggings are now my go-to (literally, I almost panicked one morning while packing my gym bag because I couldn't find my favorite pair). Also, these tennis shoes are the loveliest color called icey pink and they are super lightweight. Great for a walk or a HIIT workout.
Posted by courtney {splendid actually} at 6:30 AM 5 comments: 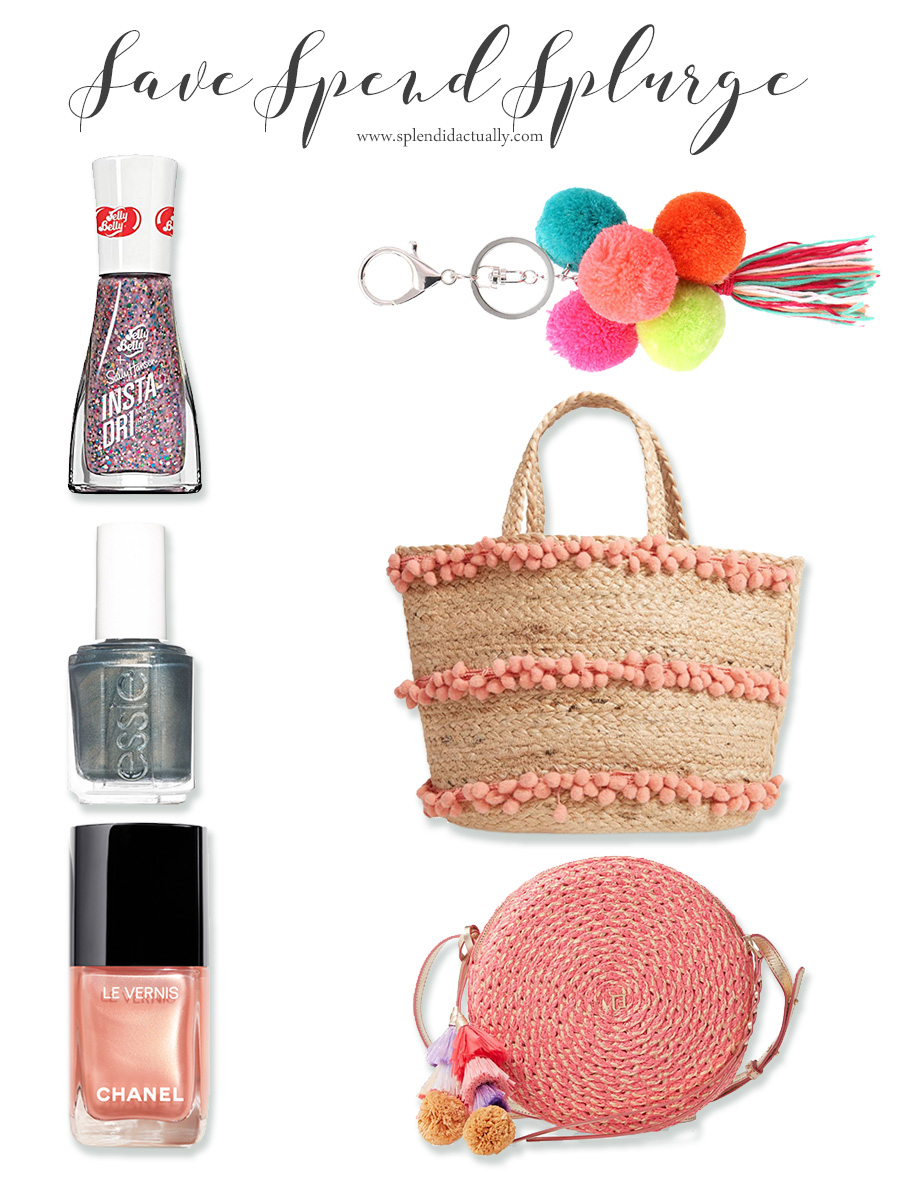 Spring has officially occurred on the calendar and my spring vacation may have come and gone, but at home it still feels like winter. In fact, three days ago we had snow on the ground, which I pretended to ignore. But with spring comes sandals and with sandals come pedicures. To pair with your polishes, I would say it's time to start thinking about your handbag choice for the season. Pom poms aren't going anywhere fast, especially as we consider beach vacations and the summer season.

Save: pair this new Sally Hansen x Jelly Belly polish with this charm to add to your favorite bag. This is the least expensive and most versatile way to go, since you can move the charm to any bag for a touch of playfulness. I love the confetti look of this Tutti Fruitti polish because it's like a party for your nails.

Spend: Essie's newest spring color, Reign Check, is the perfect blue gray with a gorgeous gold metallic sheen that would look amazing darker skin tones. I love it paired with this pom pom tote by Shiraleah because the peach would compliment the cool tones so nicely. Plus, the tote isn't massive making it a great option for an everyday carry to remind you of the beach.

Splurge: Chanel Le Vernis is a stunning peachy color with warm undertones and a metallic sheen. I love it paired with coral for a sunset vibe. This Eric Javits crossbody is the perfect color and has stunning pink, purple, and gold tassels and poms. I'm already envisioning this style with a lemon shakeup in one hand and a cotton candy swirl in the other.
Posted by cwork621 at 6:30 AM 6 comments: