With a glance at my music app, anyone would know I have quite a wide taste of music. Throughout my life my favorites have evolved but also stuck with me along the way. A love of classic rock started when I was young, then came the pop diva's of the mid-90's, followed by boy band swooning (including my first *NSYNC concert and a dozen after that). Late in high school and all throughout college it was country, country, country, along with a little hip hop and rap since I had to know the beats when going out to the club (i.e. a dirty little college bar where your feet stuck to the floor). Country music stuck with me for quite awhile and I still don't mind it too much. But within the last five years I've grasped onto contemporary Christian and 90's hip hop, which is probably a bizarre combination to most. Now, I find myself listening to a little of everything, with the exception of heavy metal, which has never really been my jam.

So for the summer I put together an ultimate summer 2017 playlist. I've linked my actual Spotify playlist here to make it super easy for you. Some upbeat, some dreamy, some old, and some new. All good. 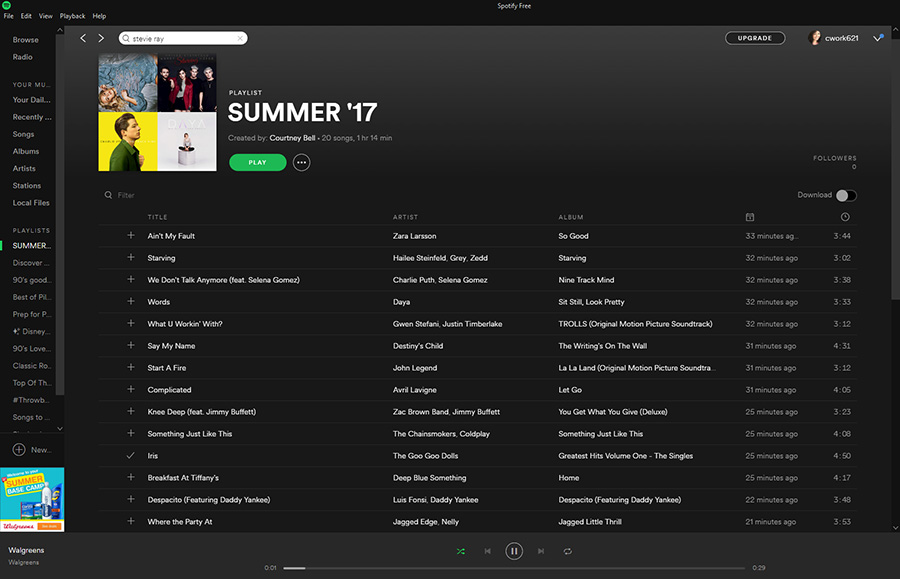 If you prefer to look them up and add some variety to your own summer playlist, here's my list of songs:

Words by Daya
What U Workin' With? by Gwen Stefani and Justin Timberlake
Say My Name by Destiny's Child
Start a Fire by John Legend
Breakfast at Tiffany's by Deep Blue Something
Starving by Hailee Steinfeld, Grey, Zedd
Ain't My Fault by Zara Larsson
We Don't Talk Anymore by Charlie Puth and Selena Gomez
Complicated by Avril Lavigne
Diamonds and Dreams by Castro
Iris by the Goo Goo Dolls
Something Just Like This by the Chainsmokers and Coldplay
Knee Deep by Zac Brown Band and Jimmy Buffett
Despacito by Luis Fonsi and Daddy Yankee
Runnin' Down a Dream by Tom Petty
Where the Party At by Jagged Edge and Nelly
The Cure by Lady Gaga
Put Your Hands Where My Eyes Could See by Busta Rhymes
The Monster by Rihanna and Eminem
Slow Hands by Niall Horan
There's Nothing Holdin' Me Back by Shawn Mendes and NOTD
Fantasy by Mariah Carey
Lookin' Out the Window by Stevie Ray Vaughan
Posted by courtney {splendid actually} at 7:00 AM